If you come out of London’s Tower Hill Underground station any time in the early evening, you’re sure to see murder enthusiasts milling around waiting for one of several Jack the Ripper tours to start. My mother and I were two such people, eager to retrace the steps of one of the most notorious killers of all time. (She’s a little obsessed. I think she’s read everything on the subject.) 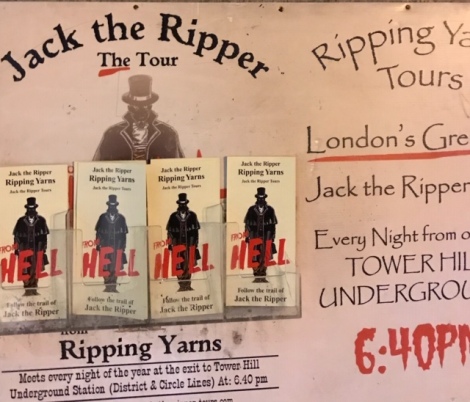 This is NOT the tour I took, but I couldn’t resist picking up their brochure.

Ironically, most Jack the Ripper Tours are actually about the victims, not Jack. It only makes sense; we don’t know who Jack is. Instead, we can examine the lives of the victims and try to glean his identity through that.

So we walked through the streets of East London and Whitechapel, hearing about the lives of Londoners during that time. The economy was disastrous. London was suddenly bursting at the seams with more people than it could support. Not surprisingly, many women turned to drastic measures to feed themselves and their children. Men did, too no doubt,  but the tour is about the women who turned to prostitution to survive.

Many of these women were over 40, left alone for one reason or another to make ends meet. It was a brutal time. Even finding a place to sleep at night was difficult. Many people had to make a choice with the few pence they had: should they spend those few coins on shelter for the night? Maybe something to eat? Or a bottle that might help them get through whatever means necessary to earn a few more pence for a bed that night? Living was a vicious cycle for the poor of the time.

Their bodies were found posed in lewd position. They were degraded even in death. There were the “canonical five” victims: Mary Nichols, Annie Chapman, Elizabeth Stride, Catherine Eddowes and Mary Kelly – all believed to have been murdered by the same man, but there were other murdered women in Whitechapel during the time who might have been victims of Jack the Ripper, too.

We retraced the steps in which the bodies were discovered. We gazed at the spots where these murders had occurred and tried to picture what London was like at that time.

At one point, we wandered down an alley where there were once shops and businesses. In one place, it was believed that Jack the Ripper left a note in blood on the wall. The sheriff ordered it washed off before further investigation could unfold. The alley is graffitied now. Sinister and oddly quiet in this off-the-beaten track spot in London.

We passed one of the oldest pubs in London. It existed even then and was full of rowdy men outside smoking and drinking despite the cold night. We passed buildings that were dormitories/rooming houses at the time. We saw pictures of life in London during that time.

We listened to theories of who has been suspected as Jack the Ripper over the past century and what progress is being made on this still-debated guessing game. But we still don’t know much about Jack the Ripper. I doubt we ever will. But we can remember his victims and imagine the terror that must have gripped the city until the killer suddenly disappeared. But I don’t think we’ll ever know it all.

Are you fascinated by Jack the Ripper?

23 responses to “Jack the Ripper Was Here”