I love a tasting room, don’t you? Walking into a shop where there are shelves and counters filled with delectable culinary treats that you can sample before you purchase is better than… well, sliced bread, or anything else that you can put jams, jellies and sauces on.

At Das Peach Haus in Fredericksburg, Texas, they actually tout themselves as offering Culinary Adventures in the forms of their store samples, wine tastings, and cooking classes/demos. They’ve managed to turn what began as a peach stand in 1969 by J.B. Wieser into a culinary destination and e-commerce business in its original Hill Country location.

Fischer & Wieser began with a peach orchard and a log house that Wieser bought for $150 in 1928. Legend goes that his wife thought he paid about $100 too much. But Wieser had vision; he wanted to plant fruit trees like he had back in Germany so he tried his hand at peaches.

Today, the family farm is run by J.B.’s grandson Mark and his business partner Case Fischer who joined the business in 1979 working first as a teenager in the store who then pursued a degree at Texas A&M in Food Technology and who now serves as CEO and President of the specialty food store.

Fischer’s passion for innovation has lead to the Culinary Adventures that Fischer & Wieser is now known for. They were the first to combine fruit and peppers into sauce with their Roasted Raspberry Chipotle Sauce. It is one of their best sellers and it is out-of-this-world!

I loved that they offered this over cream cheese with crackers in their tasting room. The combination of sweet with a touch of heat was heady, but not overpowering. I paired this with their Peach wine and felt like I’d gone to culinary heaven! I could have eaten the entire display, but I had other treats to try.

Next was the Charred Pineapple Bourbon Sauce. Simply marvelous. And what I loved about these different sauces was that their labels offer suggestions on what foods to use them with. The Bourbon Sauce would be great on chicken or shrimp. I could just imagine the deep flavors this would bring out in meats. I’ve got to try that!

Their Culinary Adventure Cooking classes/demos also give you lessons and suggestions on how to use all these incredible blends of spices in different recipes. Or you can do a wine tasting with the different flights of wines that pair nicely with a sample of four cream cheese blocks smothered in a variety of their culinary concoctions. 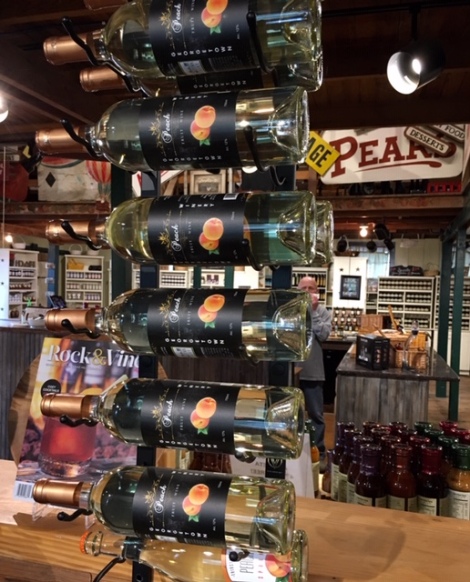 But sauces aren’t the only things that Fischer & Wieser have cooked up. There are mustards, salsas, marinades and jellies. I’m really only scratching the surface on all that they sell in this specialty foods store because I was getting full making my way around the counters. I slathered Mesquite Horseradish Mustard on a few too many pretzels, I think. The recipe booklet I got suggested using this in a Crab Salad. YUM!

I loved the salsas. All of them were fresh with flavor, but none so ridiculously hot that you couldn’t taste the ingredients. I’ve never understood why people burn their mouths on super-hot ghost peppers and the like. You can’t taste anything after the first bite! 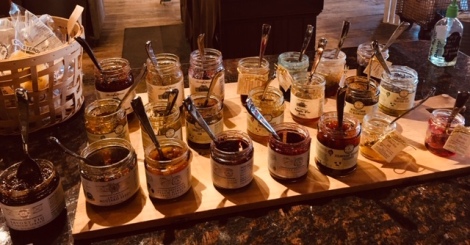 And I still had more to taste. Jellies, jams and preserves. I was gorging myself at this point and really didn’t need to try anything else to know that every item in this store was a culinary masterpiece. But I had to try the Bluebonnet Jelly. I was in Texas, after all. My host, Emma explained that it wasn’t actually made from bluebonnets since they don’t have much taste, but was inspired by the flower and what the chef imagines they’d taste like. As soon as I put it in my mouth, I tasted the delicate nuttiness of almond, and I decided this was it; this was the last flavor I wanted to put in my mouth. I would leave Das Peach Haus with Bluebonnet Jelly on my tongue.

If it hadn’t been raining, I might have bought a bottle of wine and spent the day sitting beneath the pine trees staring out over the pond and peach trees. It’s what a lot of people do and who could blame them? Visiting Das Peach Haus is a perfectly pleasant way to spend an afternoon. Or evening. Or weekend. Or more. After all, it’s going to take a while to go through all of their concoctions, and you don’t want to miss a bite!

Of the items I’ve mentioned, which would you be most eager to try?

22 responses to “A Culinary Adventure at Das Peach Haus”